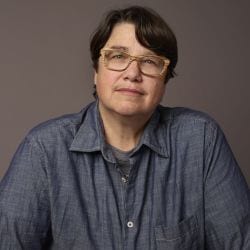 Catherine Opie (b. 1961, Sandusky, OH; lives and works in Los Angeles, CA) is an artist working with photography, film, ceramics and collage.

Opie's photographs include series of portraits and American urban landscapes, ranging in format from large-scale color works to smaller black and white prints. Moving from the territory of the body to the framework of the city, Opie's various photographic series are linked together by a conceptual framework of cultural portraiture.

In September of 2008, the Guggenheim Museum in New York opened a mid-career exhibition titled, Catherine Opie: American Photographer. Recent projects include a permanent photographic installation for the new Los Angeles Federal Courthouse in 2016, and 700 Nimes Road, a portrait of Elizabeth Taylor, published by Prestel in 2015. A large survey of Opie’s work opened at the Henie Onstad Kunstsenter in Norway in 2017, with an accompanying catalog. She debuted her first film, The Modernist, at Regen Projects, Los Angeles in 2018, followed by a New York premier at Lehmann Maupin.

Opie was a recipient of The Smithsonian’s Archives of American Art Medal in 2016; The Julius Shulman Excellence in Photography award in 2013; The Women’s Caucus for Art: President’s Award for Lifetime Achievement, a United States Artists Fellowship in 2006; the Larry Aldrich Award in 2004; the Calarts Alpert Award in the Arts in 2003; and the Citibank Private Bank Emerging Artist Award in 1997. She has been honored at numerous galas around the country, including LACMA’s Art + Film, REDCAT, The Hammer Museum and The Aperture Foundation.