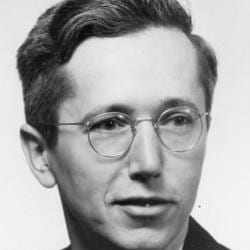 Charles D. Michener was born in Pasadena, California, on September 22, 1918, into a family with strong interests in natural history. Before high school age he had a good knowledge of the local biota and natural history and before his freshman year at the University of California, Berkeley, he knew that he wanted to become an entomologist. He had a special interest in the Hymenoptera and particularly in bees. He has explained the history of this specialization and other aspects of his career to the extent that it is possible in previous publications (preface of The Bees of the World, Johns Hopkins UP, 2000, 2nd ed., 2007; “The professional development of an entomologist,” Annual Review of Entomology 52: 1-15 + 1 plate, 2007).

His Ph.D. thesis (Univ. of California, 1942) was on the comparative morphology of bees, and it was expanded to provide a new and still widely used classification, first published in 1944. Comparative morphology, systematics, and evolution of the bees (perhaps 20,000 species) continued to be one of his fields of interest throughout his subsequent career. The result was various revisional papers and regional papers like “The Bees of Australia and the South Pacific.” Such works by Michener and many others were summarized in The Bees of the World (2000, 2007). At the same time, investigation led to the conclusions of interest in the evolution of floral relationships of bees (repeatedly from pollen specialists to generalists visiting a wide variety of flowers). Fossil bees are not numerous; the oldest that is clearly a bee is from the Cretaceous of New Jersey and belongs to the group of tropical stingless bees, a derived, highly social bee that suggests that bees arose much earlier, probably with flowering plants.

Phylogenetic patterns (trees) of organisms are based on theories rather than phylogenetic facts. Nonetheless such trees serve as the basis for classifications and hence for nomenclature. This situation led to the development (with Robert Sokal) of methods to base classifications on degree of difference among organisms rather than the often very subjective historical (phylogenetic) patterns. But almost everyone wanted to use methods based on phylogeny when it was knowable. The result was development, mostly by others, of more useful methods of phylogenetic analysis.

From about 1950 to 1980 Michener devoted about half of his research time to bee behavior and its evolution, in particular to the origin and evolution of social behavior. Much was known about such matters for highly social bees like honey bees, and for solitary bees like most species of bees. But little was understood about behavior, especially the social organization, of the scarcely social bees that are behaviorally intermediate between solitary and highly social species. Such bees have arisen independently in different families of bees and on different continents. He spent long periods, months to years, in South America, Africa, Australia, and Asia, studying the social organizations of different groups of bees as well as collecting specimens for systematic work. The behavioral work led to, and was summarized in, The Social Behavior of the Bees (1974).

After completing his Ph.D. in California, he was employed, in spite of his interest in bees, as a lepidopterist at the American Museum of Natural History in New York. While there he continued to do some systematic work on bees, but his major effort was on Lepidoptera, in particular on the comparative morphology and classification of saturnid moths. However, during the Second World War he served as first lieutenant and captain in mosquito- and chigger-control work for the Army, Chigger work, mostly done in Panama, was looking toward control of Scrub Typhus in the South Pacific, and led to publications on the systematics and ecology of chiggers. He also collected bees and later published The Bees of Panama.

In 1948 he left New York to join the Department of Entomology at the University of Kansas in Lawrence. This provided him with the opportunity to train students and to begin the studies mentioned above on bee behavior. Among the sweat bees (Halictidae) of the whole world and the Allodapine bees of the Old World tropical and austral regions, many intermediates between solitary bees with no worker caste and highly social bees with many nonreproductive workers can be found. Thus it was possible to investigate climatic and ecological factors that were involved with the origin and evolution of social behavior. At the University of Kansas he was involved in teaching and especially in guiding graduate students working on systematics (especially of bees), evolution, ecology, behavior, etc. He had students working on various taxa—of course bees but also wasps, ants, butterflies, beetles, chigger mites, etc.—and he was proud of the approximately forty-eight students who received Ph.D. degrees under his guidance. It was to interactions with this diversity of excellent students that he owed much of the breadth of his entomological knowledge.

He retired in 1989 but continued studies of bee morphology, evolution, and systematics, and guided a few graduate students as late as 2007. In 2011 he continues to add to the list of 445 publications of which he is author or coauthor; the first of which was published in 1935.