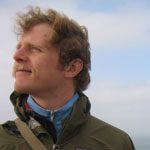 Charles Fairbanks is a wrestler, filmmaker, and Quaker. His recent work focuses on Lucha Libre in Mexico, where the artist fights as the One-Eyed Cat with a camera built into his mask. Fairbanks grew up in rural Nebraska and wrestled at Stanford, where he studied Art and the History of Science. In 2010 he received his M.F.A. from the University of Michigan, Werner Herzog selected him for the first Rogue Film School, and in 2011 Anthology Film Archives hosted Tender Muscles, a retrospective of Fairbanks’ five short films. His new work is emerging through collaboration with an indigenous Zoque community in rural Chiapas.