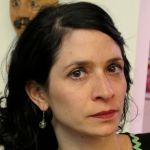 Chloe Aridjis is the author of two novels and a collection of essays. Her first novel, Book of Clouds, appeared in 2009. It was published in eight countries and won the Prix du Premier Roman Etranger in France. Her second novel, Asunder, came out in 2013.
Chloe was born in New York and grew up in the Netherlands and Mexico. She studied for a B.A. at Harvard and then went on to Oxford for a master's and Ph.D. in nineteenth-century French poetry. Her doctorate on the interface between poetry, magic shows, and literature of the fantastic was published in 2005 as Topografía de lo insólito. After Oxford she lived in Berlin for nearly six years before returning to London, where she currently resides. Chloe has been a guest at Ledig House, the MacDowell Colony, and the Santa Maddalena Foundation in Italy. She has published essays and short stories in numerous publications (among them Granta, frieze, The Threepenny Review) and given readings at festivals in Europe and Latin America. Her new novel will be set in Mexico in the late eighties.