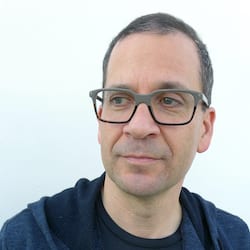 Chon A. Noriega is Distinguished Professor of Film, Television, and Digital Media at the University of California, Los Angeles. His work explores Chicano and Latino arts through their aesthetic, social, and institutional histories. He is author of Shot in America: Television, the State, and the Rise of Chicano Cinema (2000), and co-author of Phantom Sightings: Art After the Chicano Movement (2008) and Home—So Different, So Appealing (2017). Noriega has edited the collected writings of Carmelita Tropicana and Harry Gamboa, Jr., and, most recently, co-edited Chicano and Chicana Art: A Critical Anthology (2019). In conjunction with his own research, Noriega has actively archived the works and papers of individual filmmakers and artists, art groups, and community-based arts institutions. He has also curated and co-curated numerous museum exhibitions and film series, including a month-long program on “Latino Images in Film” for Turner Classic Movies which he co-hosted with Robert Osborne in 2009. For his fellowship year, Noriega is completing a book on Destructivist artist Raphael Montañez Ortiz (b. 1934), applying the artist’s notion of “de-structuring the structure” to the study of the artist’s life and body of work.