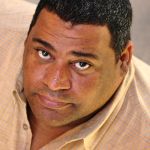 Chris Abani was born in Afikpo, Nigeria, and educated in Nigeria (B.A. in literature, Imo State University), London (M.A. in gender and politics, Birkbeck College, University of London), and the United States (M.A. in English, Ph.D. in literature and creative writing, University of Southern California). He is currently a Professor of Creative Writing at the University of California, Riverside, where he is also the Director of the M.F.A. Program.

He is also the recipient of the PEN USA Freedom-to-Write Award, the Prince Claus Award, a Lannan Literary Fellowship, and the Distinguished Humanist Award from the University of California, Riverside.

A much sought-after public speaker, Chris Abani addresses colleagues and universities as well as corporate and business groups, and professional organizations on issues of human rights, writing, literature, and interdisciplinary possibilities.