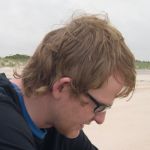 Born in Gdansk, Poland, multimedia installation artist Christian Tomaszewski received an M.F.A. from the Academy of Fine Arts in Poznan, Poland, in 1995. He moved to New York City shortly after receiving his degree, and has been a permanent resident of this country since 2003. He is currently a lecturer in visual arts at Princeton University. He has also been a visiting professor at the Academy of Fine Arts in Lodz, Poland, and an instructor in installation art at the Summer Academy in Salzburg, Austria.

His talents were quickly recognized, and even as an undergraduate he was participating in international group exhibitions, at the Academy of Fine Arts in Madrid (1991), Scheersberg, Germany (1992), and at several sites in Poland. He continued to exhibit after moving to New York, and was awarded a number of important grants, from the Pollack-Krasner Foundation (1999, 2004), the Polish Cultural Institute in New York City (2001), the Leube Baustoffe Foundation of Salzburg (2004), the Josef and Anni Albers Foundation (2004), and the Gottleib Foundation (2005).

He participated in the International Studio and Curatorial Program in New York City in 2000-01, and that same year was in residence at the American Academy in Rome. In addition, his first solo exhibition, My Own Reflection Does Not Deceive Me, was mounted at the ON Gallery in Poznan. In 2002 he participated in the studio program at the Irish Museum of Modern Art in Dublin, and he participated in its group exhibition Reconstructing a Crime – Writing a Crime. More recently, his work was shown in the group exhibition Manipulation: On Economies of Deceit at the Centre for Contemporary Art at Ujazdowski Castle in Warsaw.

During his Guggenheim Fellowship term, Mr. Tomaszewski is working on a project titled SUAHUAB, in which he will create posters in the styles of the Polish poster school of the 1960s and 1970s, as if he had been commissioned to create them as advertisements for events or movies, whether real or imagined. He is using the poster as a vehicle to investigate modes of communication and manipulation, and the relation between artist and commissioner.

Bureau for Open Culture, Columbus College of Arts and Design