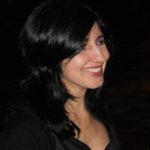 Claudia Joskowicz was born in Santa Cruz de la Sierra, Bolivia, and lives and works in New York and Bolivia. She received her M.F.A. in Studio Arts from New York University in 2000.

Joskowicz’s video work focuses on the lapses in narrative that are formed when texts or events are taken out of their original context and mediated through technology. Centering on subtle shifts in meaning or sensibility, the viewer’s gaze is directed from the events depicted on the screen to the physical movement of the camera through space, and to movement in a more abstract sense, through an imaginary cinematic space. On the whole, her work addresses the way technology mediates and redefines concepts like history, truth, and memory.

Recent solo exhibitions include shows at Thierry Goldberg Projects in New York, Museo Nacional de Arte in La Paz, and Galería Kiosko in Santa Cruz, Bolivia; recent group exhibitions, at the Tenth Sharjah Biennial, the 29th São Paulo Biennial, the Tenth Habana Biennial, Kinz, Tillou + Feigen Gallery and LMAK Projects, New York, Slought Foundation, Philadelphia, and the McDonough Museum of Art, Ohio. Her works have been also shown at El Museo del Barrio and The Bronx Museum of the Arts in New York.
In addition to her Guggenheim Fellowship, Joskowicz has been awarded numerous grants and fellowships. Selected awards include a Fulbright Scholar award, an East Harlem Arts Grant, an Urban Artists Initiative Fellowship, a fellowship in photography from the Vermont Studio Center, and the grand prize in the 2005 Digital Arts Salon at the Fundación Simón I. Patiño in Cochabamba, Bolivia. She was an artist in residence at the Lower Manhattan Cultural Council’s Workspace Residency and the Bronx Museum of the Arts AIM program.