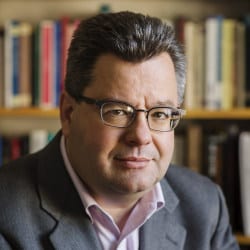 Craig Koslofsky, professor of History and Germanic Languages and Literatures at the University of Illinois, Urbana-Champaign, works in early modern European and global history. In 2011 he published Evening's Empire: A History of the Night in Early Modern Europe (Cambridge University Press). This study was widely reviewed and recognized, winning the Longman - History Today magazine 2011 Book of the Year Award; it was also named by The Atlantic as one of the 15 best books in any field for 2012. Koslofsky has spoken about his work on night life, street lighting, and the history of sleep in broadcast interviews and special programs on the BBC World Service, The Takeaway on WNYC Radio, ABC Melbourne Radio (Australia), BBC TV’s The One Show, Soundart Radio UK, on the PBS / BBC television series How We Got To Now with Steven Berliner Johnson (first aired October 2014) and for the French popular magazine Sciences Psy (August 2015).

Koslofsky received his Ph.D. from the University of Michigan in 1994. He began his career as a historian with two books on the cultural origins of the Protestant Reformation: The Reformation of the Dead: Death and Ritual in Early Modern Germany, 1450-1700 (Macmillan Press/St. Martin's Press, 2000), and Kulturelle Reformation: Sinnformationen im Umbruch 1400-1600, edited with Bernhard Jussen (Vandenhoeck & Ruprecht, 1999). He has also published on court culture, the history of kissing, the history of suicide, and on early modern German participation in the Atlantic slave trade. He has been invited to share his work on ritual, daily life, the night, and the history of the body through lectures and presentations at the German Historical Institute in Paris, Osaka City University, the University of Basel, the University of Chicago, Brown University, Seoul National University, and Yale University, among other sites. Koslofsky’s research has been supported by fellowships from the National Endowment for the Humanities, the Clark Library at the University of California, Los Angeles, and the Newberry Library. His current book project, “The Deep Surface: Skin in the Early Modern World, 1450-1750,” examines early modern ways of marking and knowing skin, including tattooing, cosmetics, branding, medicine, skin color and race.