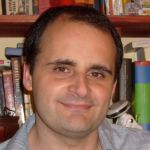 Adjunct Professor at the Physics Department of Facultad de Ciencias Exactas y Naturales since 2002, Daniel de Florian received his Ph.D. from the University of La Plata in 1995 and held postdoctoral positions at CERN and ETH-Zurich.  He is also a researcher of CONICET.

Daniel de Florian's main scientific interest is the phenomenology of high-energy physics, with emphasis on the Higgs boson search, Quantum Chromo-Dynamics, and the spin structure of the nucleon.

He has received the Houssay Award for scientific research (2005), the J. J. Giambiagi Award from the Academy of Sciences (2007), and the Beller Lectureship from the APS (2008).  He has been invited to several research institutions, among them Brookhaven National Laboratory, CERN, University of Florence, Marseille University, ETH, KITP-Santa Barbara, ECT*Trento, Durham University, and McGill University, and he has organized international conferences and schools on high energy physics.

Daniel de Florian is the author of the book Atomos, núcleos y partículas elementales: una expedición al mundo subatómico, published by EUDEBA in 2005.  He has given many public lectures to general audiences and participated in other activities with the goal of popularizing science.  He and his wife, Mariel Gutierrez, have two children, Aylen and Emilia.