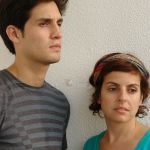 Daniel Garcia is a 2012 U.S. Rockefeller Fellow in film, and in 2011 he and his partner, Rania Attieh, were named among the twenty-five faces of independent film by Filmmakers Magazine.

A native of South Texas, he earned a B.A. in philosophy before he went on to receive his M.F.A. in film from New York University, Tisch Graduate School of the Arts. Daniel is also a musician (composing scores for his films) whose latest album was commissioned and released by the Sharjah Art Foundation and was exhibited as an installation during the Sharjah Biennial X and at the Victoria and Albert museum in London.

Together with Rania Attieh, he has co-written, co-directed, co-edited and produced many films to date. On past productions they had worked mostly with nonprofessional actors, and no crew, filling most creative and technical positions even through postproduction and finishing. Their films have screened at the Forum de Images in France, the Metropolitan Museum of Art in New York City, MoMA, the Walker Art Center, and many prestigious film festivals around the world.

They have also established a fine-art career that has its roots in street art and graffiti, which has led to gallery shows all over the world (in London, Los Angeles, New York, and Miami) as well as to commissioned work for the NBA, and the Eames Foundation.

They were commissioned by the Sharjah Art Biennial X to make the film Short Scenes from a Long Marriage dealing with Egypt’s spring revolution.

Their latest video piece, Confetti,  was on view at the Tate Modern in London as part of an invitation and collaboration with the artist Olafur Eliasson.

They are now in postproduction of Recommended by Enrique, a feature film shot in Texas and in production of another feature, H., set in Troy, New York. H. has won production support and funding from the Venice Biennale Cinema College program and will have its premiere at the Venice Film Festival 2014.

Rania and Daniel work and live in Brooklyn, New York.