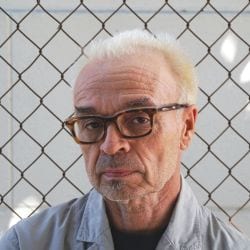 Daniel Joseph Martinez was born and raised in Los Angeles and graduated from the California Institute of the Arts in 1979. He was a student of Michael Asher and did post graduate studies with Klaus Rinke 1980-81. Throughout his career spanning four decades, Martinez has engaged in an interrogation of social, political, and cultural mores through artworks that have been described as nonlinear, asymmetrical, multidimensional propositions. Operating with fluidity and as open source manifestations not bound by any singular category, his works extend from the ephemeral to the solid. Martinez’s practice is media fluid, taking the form of text, sculpture, photography, painting, installation, robotics, performance, and public interventions to unapologetically question issues of the politics of race, free will, human nature, personal and collective identity, vision and visuality, and the fissures formed between the appearance and the perception of difference. Ongoing themes include contamination, history, surveillance, violence, nomadic power, cultural resistance, war, dissentience, time travel, post humanism, AI, machine intelligence, quantum physics, interdimensional travel, and systems of symbolic exchange, directed toward the precondition of politics coexisting as radical beauty. Their commonality is that they all address topics of race, class, Idenity and sociopolitical boundaries present within American society.

Committed to artist-run and not for profit galleries and organizations, Martinez was a co-founder of Deep River and LA>