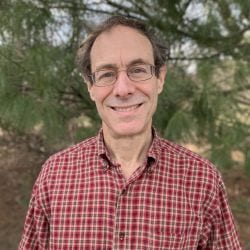 David S. Jerison is a professor of mathematics at MIT. The current focus of his research is on shapes of solutions to partial differential equations, especially eigenfunctions, free boundaries, and isoperimetric surfaces. He will use the Guggenheim grant to study interfaces that divide regions in optimal ways, such as those interfaces that minimize energy, cost, or loss of information.

Jerison is one of ten principal investigators participating in a Simons Foundation Collaboration Grant that began in 2018 to study wave propagation in disordered media. The project, directed by Svitlana Mayboroda at the University of Minnesota, brings together pure and applied mathematicians with theoretical and experimental physicists and engineers working with LEDs and Bose-Einstein condensates.

Jerison is also very engaged with teaching. In 2004 he was named a MacVicar Faculty Fellow, MIT's highest teaching award. He has served for many years as faculty advisor to RSI and SPUR, summer research programs for high school students and MIT undergraduates paired with graduate student mentors. He was a principal designer of several on-line courses at MIT's Open Courseware, MITx and edX, and his 2007 lectures on one-variable calculus have been viewed over five million times.

Jerison received his AB in mathematics from Harvard University in 1975 and his PhD from Princeton University in 1980. After an NSF postdoctoral fellowship at the University of Chicago, he joined the MIT faculty in 1981. He has held visiting positions at the University of Paris at Orsay and at Harvard University, at the Mathematical Sciences Research Institute in Berkeley and the Institute for Advanced Study in Princeton. He received a Sloan Foundation Research Fellowship and an NSF Presidential Young Investigator Award in 1985. He won the Bergman Prize, jointly with John M. Lee, in 2012, and was awarded a Simons Fellowship in 2018. He is a Fellow of the American Academy of Arts and Sciences and the American Mathematical Society and was elected to a three-year term as Vice President of the American Mathematical Society in 2017.