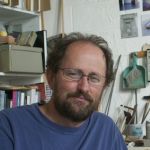 David McDonald was born in Liverpool, England, and raised in England, Canada, Brazil, and Venezuela.  He came to the United States to attend college and graduated from Boston University with a B.S. in Film and Broadcasting.  After graduation his focus gradually shifted to art and he attended the School of the Museum of Fine Arts, Boston, and the California Institute for the Arts in Valencia where he received his M.F.A.

McDonald’s sculpture has always developed out of a process that is material based, and combines found and bought materials, and an interest in fragments, decay, and quasi-architectural references.  While the early work was process-based and resolutely abstract, the more recent work has taken a turn towards the metaphorical use of materials and a stronger investment in psychology and Buddhist philosophy. He continues to maintain a formal language that has evolved from post-minimalism, certain outsider artists, and the architecture of necessity that he encountered in his childhood in Brazil and Venezuela.

McDonald has exhibited his work in galleries and museums in New York, Boston, Los Angeles, Santa Fe, San Francisco, and Portland.  His work has been reviewed by the Los Angeles Times, LA Weekly, Boston Globe, the Santa Fean, Wall Street Journal, and Sculpture Magazine. He has also been the recipient of a Pollock Krasner Foundation Grant and a grant from the City of Santa Monica’s Cultural Affairs Department.  McDonald lives and works in Los Angeles and is represented by Carter & Citizen, also in Los Angeles.