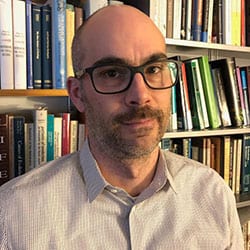 David Sepkoski is the Thomas M. Siebel Chair in History of Science and Professor in the Department of History at the University of Illinois, Urbana-Champaign.  He has published widely on histories of biology, the earth and environmental sciences, and data.  His most recent book is Catastrophic Thinking: Extinction and the Value of Diversity from Darwin to the Anthropocene (University of Chicago Press, 2020).  Previously, he published two books, Rereading the Fossil Record: The Growth of Paleobiology as an Evolutionary Discipline (Chicago, 2012) and Nominalism and Constructivism in Seventeenth-Century Mathematical Philosophy (Routledge, 2007).  He is the author of more than two dozen articles and book chapters, and editor of several books or special journal issues, including Data Histories (Osiris 32, 2017) and The Paleobiological Revolution: Essays on the Growth of Modern Paleontology (Chicago, 2009).  From 2012 to 2018, he was a Senior Research Scholar at the Max Planck Institute for the History of Science in Berlin, and he previously held faculty positions at the University of North Carolina Wilmington and Oberlin College. Photo Credit: Terri Chettiar