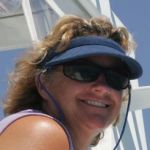 Denise Herzing, Research Director of the Wild Dolphin Project, has completed 27 years of her long-term study of the Atlantic spotted dolphins inhabiting Bahamian waters, and continued this research as a Guggenheim Fellow.  She received her B.S. in marine zoology from Oregon State University in 1979; her M.A. in behavioral biology from San Francisco State University in 1988; and her Ph.D. in behavioral biology/environmental studies from Union Graduate School, Cincinnati, Ohio, in 1993.  She is an affiliate Research Faculty in Biological Science and in the Department of Psychology at Florida Atlantic University, Boca Raton, Florida.  She is also a Fellow of the Explorers Club.

Ms. Herzing has authored and co-authored many papers in the fields of whale biology, animal communications, and human consciousness.  Coverage of her work with the spotted dolphins has appeared in National Geographic, BBC Wildlife, Ocean Realm, and Sonar magazines.  Her work has been featured on Nature, Discovery Channel, PBS, ABC network television, BBC in England, and NHK in Japan.

Her fields of interest are animal consciousness, behavior and communication of cetaceans, and environmental ethics.  Ms. Herzing has given presentations and lectures to the following research, education, and conservation organizations: Society for Marine Mammalogy, European Cetacean Society, International Fund for Animal Welfare, and American Cetacean Society.

Deciphering dolphin communication involves not only studying body postures but their acoustic correlates. A spectrogram is a visual representation of a sound, such as the whistle seen here, with frequency (pitch) on the vertical axis and time (seconds) o