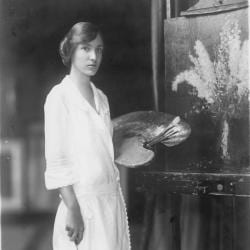 Ochtman, Dorothy: Appointed for study in the museums and art galleries in Europe, and for creative work, with special emphasis on figure and portrait painting; tenure, twelve months from May 20, 1927.

Principal Paintings: “The Tang Jar,” awarded the Julia A. Shaw Memorial Prize at the Winter Exhibition of the National Academy of Design in 1921; “Flower Panel,” 1923, overmantel in home of Mrs. Owen D. Young; “An Old Brass Kettle,” awarded the third Hallgarten Prize at the National Academy of Design in 1924; “Garden Flowers,” awarded honorable mention at the Exposition of Women’s Arts and Industries, 1926; “Winter Blossoms,” awarded honorable mention at the Smith College Alumnae Exhibition, 1925; “The Empty Jug,” “Jug of Flowers,” “To the Ancient Gods,” “The Russian Pan,” “The Persian Vases,” “Leonard Ochtman in His Studio,” “ The Vase from Aleppo,” and other paintings shown at the National Academy of Design, the Toledo Museum, National Association of Women Painters and Sculptors, Corcoran Gallery, Grand Central Galleries, The Pennsylvania Academy of the Fine Arts, and in other exhibitions.