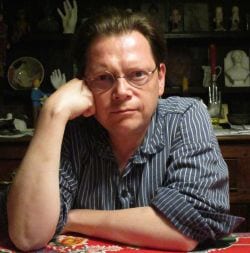 Edward Carey is a writer and illustrator who was born in North Walsham, Norfolk, England. Like his father and his grandfather, both officers in the Royal Navy, he attended Pangbourne Nautical College, but instead of enlisting in the navy he joined the National Youth Theatre and studied drama at Hull University.

He has written plays for the National Theatre of Romania and the Vilnius Small State Theatre, Lithuania. In England his plays and adaptations have been performed at the Young Vic Studio, the Battersea Arts Centre, and the Royal Opera House Studio. He has collaborated on a shadow puppet production of Macbeth in Malaysia, and with the Faulty Optic Theatre of Puppets.

He is the author of the novels Observatory Mansions (Crown/Vintage) and Alva and Irva: the Twins Who Saved a City (Harcourt), and of the YA Iremonger Trilogy (Overlook), which have all been translated into many different languages and all of which he illustrated. His most recent novel is Little (Riverhead), which has taken him fifteen years to finish. He always draws the characters he writes about, but often the illustrations contradict the writing and vice versa and getting both to agree with each other takes him far too long.

His current project is a novel tentatively titled A Child Called Bed. It is inspired by his time as a writer in residence at the Meyer Children’s Hospital in Italy. The novel hopes to be a fantastic story of medicine and hospital routines, of the business of healthcare and the dangers of medical practice. It will include many uncomforting monsters, five of which are illustrated below.

He has lived in England, France, Romania, Lithuania, Germany, Ireland, Denmark, and the United States. For the last nine years he has lived with his wife, the writer Elizabeth McCracken and their children, in Austin, Texas, which is not near the sea.