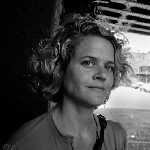 Eliza Griswold received a 2011 Anthony J. Lukas prize for her New York Times bestselling book The Tenth Parallel. She also received a 2010 Rome Prize from The American Academy in Rome for her poetry. Having won awards for both her nonfiction and her poems, she is currently a senior fellow at the New America Foundation. A former Nieman Fellow at Harvard University, she reports on religion, conflict, and human rights. Her first book of poems, Wideawake Field, was published in 2007 by Farrar Straus Giroux and The Tenth Parallel, an examination of Christianity and Islam in Africa and Asia, also  published by FSG, was released in the fall of 2010. Her reportage and poetry has appeared in The New Yorker, The Atlantic Monthly, The New York Times Magazine, Harpers, The New Republic, among many others.