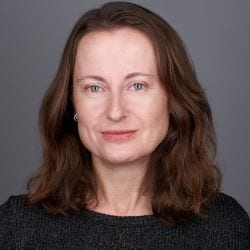 Emily Wilson is a Professor in the Department of Classical Studies and Chair of the Program in Comparative Literature and Literary Theory at the University of Pennsylvania. She works on the reception and translation of ancient Greek and Roman literature and philosophy.  She is interested in the sounds, rhythms and meanings of words, and the ways ideas, cultures and people change over time. Wilson is the recipient of a Rome Prize and a Macarthur Fellowship.  She has published three monographs and one edited volume on ancient tragedy, epic and philosophy and their later receptions, as well as numerous reviews, articles and essays, often grappling with the gap between the present and the ancient past. She is the Classics editor of the revised Norton Anthology of World Literature.  She discusses her work as a translator and classicist on Twitter (see link in website). She is working on a new translation of select dialogues of Plato, and as her Guggenheim project, a new translation of the Iliad. Photo Credit: M. Hamilton