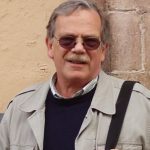 Eric Van Young is Distinguished Professor of History at the University of California, San Diego, where he has chaired his department (2000-2004), served as Interim Dean of Arts and Humanities (2007-2009), and been Associate Director of the Center for U.S.-Mexican Studies (1995-2000). He received his B.A. with Honors in history from the University of Chicago (1967), and the Ph.D. in history from UC Berkeley (1978), where he studied under the direction of the late Woodrow W. Borah. He taught briefly at the University of Minnesota-Twin Cities (1979-1980), then at the University of Texas-Austin (1980-1982), coming to UC San Diego in 1983. Van Young has received fellowships from the Social Science Research Council, the Tinker Foundation, and the National Endowment for the Humanities, and has taught in Spain, Mexico, and France. He has served as president of the Conference on Latin American History, is a Corresponding Member of the Mexican Academy of Sciences, and in 2009 was awarded the Medalla 1808 by the government of the Distrito Federal in Mexico for his contributions to Mexican historiography.

The project for which he was awarded a Guggenheim Fellowship for 2011-12 is a biography of the Mexican statesman, entrepreneur, public intellectual, and historian Lucas Alamán (1792-1853), one of the key political figures in the history of the early Mexican republic. Alamán was a political conservative who drifted more and more toward monarchism in his later years, but was never the de Maistre-like reactionary he has often been painted. He was also a modernizer, believing that Mexico must liberate itself from its centuries-long dependence on silver mining by industrializing, toward which end he founded a development bank for the textile industry when he held the key ministerial position in the national government in the early 1830s. He proved better at writing about economic development and political economy than participating in them himself, since almost all his large plans to become wealthy ended in failure. Finally, he is also arguably Mexico’s greatest historian of the nineteenth century, having authored toward the end of his hectic public life a magisterial, five-volume history of the Mexican struggle for independence from Spain, which he regarded as in some sense inevitable, but as stained with savagery, bloodshed, and civil strife that set Mexico off down the wrong path as a new nation.