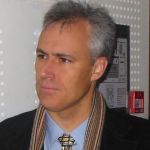 Eric T. Jennings is a professor of history at the University of Toronto.  He is a fellow at Victoria College and specializes in modern French colonialism. His study of French Equatorial Africa and Cameroon under Free French rule, entitled La France libre fut africaine, was published by Perrin in 2014, and will appear in English with Cambridge University Press. It considers the centrality of sub-Saharan Africa for the Fighting French movement, paying special attention to issues of legitimacy and coercion. His Dalat and the Making and Undoing of French Indochina (University of California Press, translated as La ville de l’éternel printemps) was a multiangled study of a French colonial hill station in Southeast Asia. It focused on place, power, and colonial fault lines. Curing the Colonizers (Duke UP, translated into French as A la Cure les Coloniaux) was situated at the crossroads of the histories of colonialism, medicine, culture, leisure, and tourism. In 2001, Jennings published Vichy in the Tropics (translated as Vichy sous les tropiques), a book derived from this Berkeley Ph.D. thesis that explored the ultraconservative and authoritarian Vichy regime’s colonial politics, and the formation of new colonial identities in the French Caribbean, Indochina, and Madagascar. His other works include an edited volume with Jacques Cantier, L'Empire colonial sous Vichy (Odile Jacob), as well as many articles and chapters straddling the histories of France, Southeast Asia, the Indian Ocean, Africa, and the Caribbean. Jennings has served as director of the University of Toronto’s Centre for the Study of France and the Francophone World (CEFMF).   He has received the Alf Heggoy and Jean-François Coste prizes and the Palmes académiques, as well as funding from the Social Science Humanities and Research Council of Canada, Jackman Humanities Institute, and Canadian Institute for Health Research.  He has been invited as visiting professor to the Ecole des Hautes Etudes en Sciences Sociales and Saint Andrews University. With the support of the Guggenheim Foundation, Jennings is researching the wartime escape of thousands of European refugees to Martinique between 1940 and 1942, and the myriad encounters that resulted, including convergences around Surrealism and Négritude.