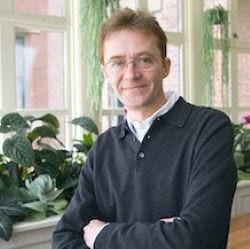 Eric Rebillard is the Avalon Foundation Professor in the Humanities, Professor of Classics and History, at Cornell University. He is a historian of early Christianity and late antiquity. Rebillard authored The Care of the Dead in Late Antiquity (Cornell University Press, 2009) and Christians and their Many Identities in Late Antiquity (Cornell University Press, 2012). A collection of 18 of his papers has been published as Transformations of Religious Practices in Late Antiquity (Ashgate, 2014). His last major research project focused on early martyr narratives. In addition to a collection of texts (Greek and Latin Narratives about the Ancient Martyrs. Oxford University Press, 2017), a second outcome is his forthcoming monograph: The Early Martyr Narratives: Neither Authentic Accounts Nor Forgeries (University of Pennsylvania Press, 2020). As a Guggenheim fellow, Rebillard will work on a monograph called “Redescribing the Triumph of Christianity.” It challenges traditional accounts of the rise of Christianity: Christianity's success should not be sought in the number of its converts—the number of Christians enrolled in a church and participating in its organized rituals has always been low—but in the transformative effects it had on the culture, structures of knowledge, and religious practices of the Mediterranean world. Photo Credit: Jason Koski (UREL), Copyright Cornell University