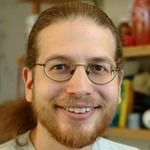 Erik Demaine is a computer scientist and an artist.  Since 2001, he has been a professor of computer science at the Massachusetts Institute of Technology. Erik's research interests range throughout algorithms, from data structures for improving web searches to the geometry of understanding how proteins fold, to the computational difficulty of playing games. He received a MacArthur Fellowship (2003) as a "computational geometer tackling and solving difficult problems related to folding and bending—moving readily between the theoretical and the playful, with a keen eye to revealing the former in the latter."  Erik cowrote a book about the theory of folding, together with Joseph O'Rourke (Geometric Folding Algorithms, 2007), and a book about the computational complexity of games, together with Robert Hearn (Games, Puzzles, and Computation, 2009).  Together with his father, Martin, his interests span the connections between mathematics and art, including curved origami sculptures in the permanent collections of the Museum of Modern Art in New York, and the Renwick Gallery in the Smithsonian. Currently they are working on extending folding to other materials, such as glass.