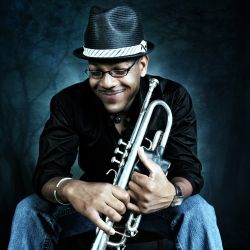 Born on the Island of Trinidad in 1983, Etienne Charles defies easy musical categorization. He has been hailed by the New York Times as "an auteur" and by Jazz Times as "A daring improviser who delivers with heart wrenching lyricism." According to Downbeat Magazine "Charles delivers his ebullient improvisations with the elegance of a world-class ballet dancer." Etienne has received critical acclaim for his exciting performances, thrilling compositions and knack for connecting with audiences worldwide. In 2012 Etienne was written into the US Congressional Record for his musical contributions to Trinidad & Tobago and the World. In 2013 he was awarded the Caribbean Heritage Trailblazer Award, by the Institute of Caribbean Studies, Washington, DC. In 2006 he won 1st place in the National Trumpet Competition Jazz Division in Fairfax, VA

Perhaps more than any other musician of his generation or Eastern Caribbean origin, Etienne brings a careful study of myriad rhythms from the French, Spanish, English and Dutch speaking Caribbean to his work. Crucially, as a soloist, he fully understands the New Orleans trumpet tradition (which is readily discernible in his trademark instrumental swagger) and what famed Crescent City Pianist, Jelly Roll Morton so succinctly captured in the now immortal phrase, 'The Spanish Tinge'.

His latest recording, Creole Soul (Culture Shock Music 2013), features original compositions and arrangements of music by Bob Marley, Winsford Devine, Thelonious Monk and Bo Didley. The album spent three consecutive weeks at #1 on the Jazz Week Chart as well as reaching #25 on the Billboard Jazz Charts. Creole Soul was named as the #3 Jazz Album of 2013 by Jazz Week. Previously he released Kaiso (2011), Folklore (2009) and Culture Shock (2006)

In August 2015, Etienne will premiere the San Jose Suite, a new work made possible with support from Chamber Music America's 2014 New Jazz Works grant funded through the generosity of the Doris Duke Charitable Foundation. This fall will see the release of his album Creole Christmas, a cross-collaboration highlighting traditional Caribbean holiday folk music, featuring musicians from the United States, Venezuela Macedonia, and Trinidad & Tobago.