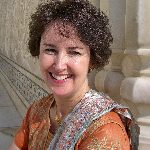 I am a professor of French and Italian and Women’s and Gender Studies at Dartmouth College, where I have taught since 1986 after receiving my B.A. from Mount Holyoke College and my M.A. and Ph.D. from Princeton.   The focus of  my work as a scholar and a teacher is resurrecting the works and voices of French women writers primarily from the early modern period and putting them in dialogue with those of their contemporaries.  I interrogate the effect women’s actions have had on the cultural field in general, and analyze how and why the historical record has been constructed to erase this influence.  My current research project, “Exotic Encounters:  Versailles Meets the Taj Mahal,” which the Guggenheim Foundation has chosen to support, builds on my previous work on French salon culture.  I am exploring how one particular salon served as the focal point for the encounter between France and India during France’s Grand Siècle and the effect of this encounter on early Enlightenment thought, material culture, and on literature.  While my work cuts across the traditional disciplinary boundaries of history and literature, I consider myself first and foremost a literary critic who also specializes in the history of ideas.

In my first book, Revising Memory:  Women's Fiction and Memoirs in Seventeenth-Century France (Rutgers UP, 1990) I argue that it was not a coincidence that the development of a strong female literary tradition in France occurred at precisely the time that Louis XIV was constructing a carefully controlled history of his actions for his century and for posterity.  What I term the “particular history/histoire particulière” found in women’s memoirs and novels is an effort on the part of these women to challenge the royally sanctioned “public history.”

In my second book, Mastering Memory:  Salons, History, and the Making of Seventeenth-Century France, I show how women’s participation and influence through the salon culture they developed affected the literary field in general.  This book proposes an answer to a question that I am asked constantly:  “If these women were so important, and the salons were so influential, why don’t we know more about them?”  I argue that this female influence, while acknowledged in the seventeenth century and even hailed as a defining characteristic of France, was gradually and deliberately written out of the literary and historical record, as the seventeenth-century literary field was designated as the “classical” field and the epitome of French literary culture. The second half of the book is an analysis of how historians, writers, and philosophers rewrote the history of the salon and the cultural forces that impelled them to do so.

The Guggenheim Fellowship will allow me to finish writing “Exotic Encounters:  Versailles Meets the Taj Mahal.”  This work was first inspired by research I did for the Salons book.  Near the end of that project, I came across a particularly influential salonnière, Mme de la Sablière, who is known primarily for supporting La Fontaine.  Very little work has been done on La Sablière herself; she is most frequently only a footnote in La Fontaine studies.  However, she was well known by her contemporaries, and famous especially during the 1670s for her salon, which attracted some of the most foremost intellectuals and writers of the period.  Sablière is thus the perfect illustration of the main point of my Salons book:  that female-dominated salons shaped intellectual thought and literary creativity of the period.  One salon participant and friend in particular caught my attention:  François Bernier.  He had spent over ten years at the Mughal court and composed and published his memoirs while a member of La Sablière's salon.  For the past seventeen years I have divided my time between the United States, France, and India, as my husband is from India.  I became very intrigued by this encounter between France and India at a time when both cultures were especially influential and powerful.  I am attempting to answer the question “What effect did this encounter with India, during the reign of Louis XIV, have on the mindset and cultural production of the period?”

Teaching and research go hand in hand, especially at a place such as Dartmouth.  My career has thus focused as much on exploring the recesses of the past and reinterpreting literary texts as it has on developing courses and approaches to transmit this research to others.  I have edited two teaching volumes for the Modern Language Association, Approaches to Teaching Lafayette’s La Princesse de Clèves, which I co-edited with Katharine Ann Jensen, and Options for Teaching Seventeenth and Eighteenth-Century French Women Writers.  I consider these two volumes to be a necessary corollary to my research. With works such as these, I hope to change the way professors and scholars approach women’s works and women's history.  Instead of creating a syllabus and then saying “I should include a few women…whom should I add?” I hope that eventually such a question will not even arise.  Women’s works and history, such as the salon culture they developed, will one day, hopefully, be so integrated into the questions we ask and the way we look at the past, that women’s history and their works will be a natural part of the questions, and not supplements to be added out of a sense of obligation to "include women."

In addition to my teaching on campus, I have regularly directed Dartmouth’s off-campus programs in France. For the past five years I have also helped develop a foreign-study program in India for our Women's and Gender Studies and Asian and Middle Eastern Studies programs, a project that I consider essential to promoting cultural competency in today's globalized world.

I have been actively involved in my profession, both on and off the Dartmouth campus. I have been elected or appointed to various positions in the Modern Language Association, the North American Society for Seventeenth-Century French Literature (past president), and the Society for Interdisciplinary Seventeenth-Century French Studies.  I am currently the editor of Cahiers du dix-septième.

I am passionate about my research and teaching, but my most rewarding, challenging, and enriching work has been raising my two children, Anjali, 16, and Christopher, 13.  I am very blessed to have them and my husband, Anant, as my companions in life.