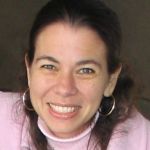 Fernanda G. De Felice is an Associate Professor of Biochemistry at the Federal University of Rio de Janeiro. She received her M.Sc. (1997) and Ph.D. (2002) from that University as well, and joined its faculty as an assistant professor in 2002. As a graduate student she had worked in the laboratory of Sérgio T. Ferreira, and she also spent her early years as a faculty member in his lab, building up her own research group and continuing the work she had begun there as a Ph.D. student, researching the relationship between amyloid-beta (Abeta) peptide and Alzheimer’s disease.

In 2005, she was awarded a Human Frontier Science Program (HFSP) postdoctoral Fellowship, only the second Brazilian so honored. The Fellowship allowed her to spend almost three years at Northwestern University, where she delved further into neurobiology in the lab of William L. Klein. During this period she was able to demonstrate that Abeta oligomers block the insulin receptors in the brain that are essential for proper signaling in nerve cells. She presented her innovative findings in two landmark articles: (with W. Zhao et al.), “Amyloid beta oligomers induce impairment of neuronal insulin receptors,” The Federation of American Societies for Experimental Biology Journal, 22, No. 1 (2008); and (De Felice et al.), “Protection of synapses against Alzheimer’s-linked toxins: Insulin signaling prevents the pathogenic binding of Aβ oligomers,” Proceedings of the National Academy of Sciences, 106, No. 6 (2009). These articles received widespread attention not only in the scientific community but in general interest magazines.

At the end of 2007, she returned to Brazil, where she heads the Laboratory of Neurobiology of Alzheimer’s Disease. While continuing her own researches, she has supervised three M.Sc. theses and two Ph.D. dissertations; currently six Ph.D. candidates, two M.Sc. students, and six undergraduates are working under her supervision.

In 2003 she was appointed a Junior Investigator of the Brazilian National Research Council and was honored as a Young Scientist of the State of Rio de Janeiro (FAPERJ), a prize presented by the Governor of the State of Rio de Janeiro. Ms. De Felice received the FAPERJ prize twice more, in 2007 and 2009. Her work has been recognized by a number of other important awards: the Marie and Carl Duncan Prize for Research in Memory Disorders (2006); the International Society for Neurochemistry’s Young Investigator Award (2007); selection by HFSP to participate in the 57th Meeting of Nobel Prize Winners in Lindau, Germany (2007); and the 3rd Young Scientist Prize, conferred by the Academy of Sciences for the Developing World (TWAS). In addition in 2008 she not only was elected an Affiliated Member of both the Brazilian Academy of Sciences and TWAS, but was the first Brazilian to receive the Human Frontier Science Program’s Career Development Award.

She has shown through her groundbreaking work that Alzheimer’s disease might be characterized as a third kind of brain-specific diabetes, since the overabundance of Aβ oligomers in the brains of patients with this disease block the proper use of insulin, which is vital to memory. During her Guggenheim Fellowship term, she will continue this line of research.