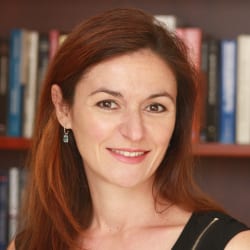 Feryal Ӧzel is a Professor of Astronomy and Astrophysics at the Department of Astronomy at The University of Arizona. She has made pioneering contributions to the physics of neutron stars and black holes, as well as to the co-evolution of black holes and galaxies in the early Universe. Dr. Ӧzel is carrying out the first accurate measurements of the neutron star radii that constrain the ultradense matter equation of state. Based on her work on accretion flows, she has made the first size predictions of the images of nearby supermassive black holes at different wavelengths.

Born in Istanbul, Turkey, Dr. Ӧzel attended the Uskudar American Academy for middle school and high school, graduating in 1992. She received a BS summa cum laude from Columbia University and was the salutatorian of her class. Spending a year in Europe, she received a master's degree from Niels Bohr Institute in 1997 and worked at CERN. She received her PhD from Harvard University in astrophysics in 2002 on the effects of the intense gravitational and magnetic fields of neutron stars. Before joining the faculty at the University of Arizona, she was a NASA Hubble Postdoctoral Fellow at the Institute for Advanced Study at Princeton.

Dr. Ӧzel is a Fellow of the American Physical Society and a member of the Science Academy of Turkey. Ӧzel received the Maria Goeppert Mayer award from the American Physical Society, the Radcliffe Institute for Advanced Study Fellowship, the Miller Institute Visiting Professorship from the University of California in Berkeley, and the Bart J. Bok Prize from Harvard University.

Dr. Ӧzel has served on a large number of advisory committees for NASA and the National Science Foundation, including the NASA Astrophysics 30-year Roadmap and the Chandra X-ray Telescope Users Committee. She is currently the chair of the Science and Technology Definition Team for NASA’s X-ray Surveyor Mission. She frequently appears in TV documentaries on PBS, the History Channel, and CNN International as well as in many scientific articles in the popular press. She has also been a spokesperson for the Louis Vuitton's Women's Literacy Campaign in the Middle East.

During her fellowship year, Dr. Ӧzel will carry out high resolution studies of compact objects, including the surfaces of neutron stars and the event horizons of black holes.