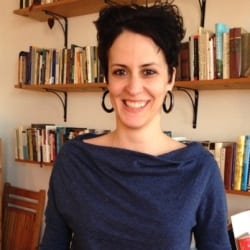 Last Last Chance was a Time Out New York “Best Book of the Year.” Woke Up Lonely was a finalist for the Believer Book Award and optioned by 21st Century Fox. Maazel is winner of the Bard Prize for Fiction and a National Book Foundation “5 Under 35” honoree. Her stories have appeared in Conjunctions, Harper’s, Ploughshares, Tin House, Best American Short Stories 2017, and elsewhere.

She has served as chair of the judging committee for the PEN/Robert W. Bingham Prize, a judge for the Center for Fiction’s First Novel Prize, and has hosted the National Book Awards Finalists Reading.

She has taught in the creative writing programs at Brooklyn College, NYU, Adelphi, Princeton, Syracuse, Columbia, and the University of Leipzig, Germany, and is currently the Director of Communications for a legal nonprofit, Measures for Justice.

Maazel is a graduate of Williams College and the Bennington Writing Seminars. She lives in Brooklyn, NY.