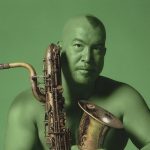 Fred Ho is a Chinese American matriarchal revolutionary socialist, aspiring Luddite, and composer of Afro Asian manga opera and other grand works. He has never had a university or any institutional job his entire professional life, and runs his own for-profit enterprise, Big Red Media, Inc. He has won five Rockefeller Foundation fellowships, three New York Foundation for the Arts fellowships, a National Endowment for the Arts fellowship in Jazz Composition and Opera/Musical Theater, the Harvard Arts Medal, and many other mainstream and guerilla awards, the latter including Martial Arts Pioneer by the Museum of the American Moving Image. Some would say he is a “Tang Dynasty Man” or a “Timbuktu Man,” or, if one must be Eurocentric, then a “Renaissance Man.” He is the author of seven books, including most recently Diary of a Radical Cancer Warrior: Fighting Cancer and Capitalism at the Cellular Level, and Raw Extreme Manifesto: Losing Weight, Self-Improvement and Changing the World by Spending Almost Nothing!, both by Sky Horse Publishing.

His manga operas include Deadly She-Wolf Assassin at Armageddon!; Journey Beyond the West: The New Adventures of Monkey; and Voice of the Dragon: Once Upon a Time in Chinese America . . . The Martial Arts Epic, among about a dozen works.

He has been fighting advanced colorectal cancer since 2006, including four tumors in four years, the loss of his left kidney, bladder, and prostate, and a whole host of other physical losses, which have in turn gifted him with a profound ability to pursue a mission of doing the politics and art that no one else can or will do.