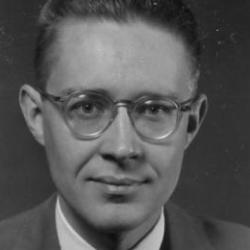 Gene B. Carpenter is Professor Emeritus of Chemistry at Brown University, where he has held a faculty appointment since 1949. After retirement in 1988 he continued research work for almost two decades. He received his B.A. in chemistry from the University of Louisville in 1944, and his M.A. in 1945 and Ph.D. in 1947 from Harvard University, both in physical chemistry. His research career since then has been devoted chiefly to X-ray crystallography, which incorporated his early interests in molecular structure and geometry.

In 1947 he went to the California Institute of Technology with the aid of a National Research Council fellowship, where he learned the principles and techniques of crystallography from the distinguished group of scientists gathered there by Linus Pauling. Two years later he took up an appointment at Brown, where he set up an X-ray laboratory and began independent work. Several extended visits to other centers of X-ray structure work provided varied experience and exchange of ideas.

In 1966 he taught chemistry courses at Tougaloo College, Tougaloo, Mississippi, on special assignment from Brown, to help with an unexpected loss of a faculty member there. This deviation from normal routine was both pleasant and satisfying; research activity at Brown continued with help of a postdoctoral research associate.

He wrote Principles of Crystal Structure Determination, published in 1969, because there was then no adequate textbook for the course he taught. The book was notable for the amount of information it conveyed in a relatively few pages.

At the end of the Oak Ridge trip, he was asked to return to Brown immediately in order to help with planning a major new building to house chemistry and geology research. He and his colleague Philip Rieger served as intermediates between chemistry faculty and the architects and engineers. This merging of experience produced an attractive and functional design.

He is a member of the American Crystallographic Association and of the American Chemical Society. He has authored or co-authored well over a hundred research papers, almost all reporting one or more new structure determinations. He had started such work when X-ray crystallography was a difficult and time-consuming process, then participated in the steady increase in speed and power of the technique, until it is now almost routine to solve structures of molecules of 100-200 atoms in a few days.