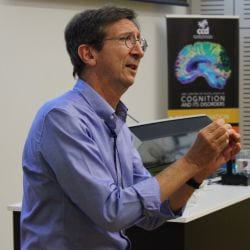 Some of his most influential work includes the journal article “Reference to Kinds across Languages” (Natural Language Semantics, 1998), which maps out what changes and what remains constant in the way nouns with and without articles refer across languages, and the book Logic in Grammar (Oxford University Press, 2013), which studies the connection between logic and meaning from the point of view of how expressions are affected by whether they are used in positive or negative contexts. Together with Sally McConnell-Ginet, Chierchia co-authored Meaning and Grammar: An Introduction to Semantics (MIT Press, 1990), the first textbook devoted to modern natural language semantics, and one that remains widely used. Now in its second edition (MIT Press, 2000), the book has been translated into several languages.

Chierchia will use his Guggenheim Fellowship to pursue his long standing interest in what he calls the ‘Spontaneous Logicality of Language.’ A very controversial issue is how speech sounds of the human vocal tract in spoken languages and signs with the hands and other body parts in sign languages spontaneously acquire meaning and become vehicles of communication. Consider, by contrast, the case of music. Music, broadly construed, is also a form of cognitively driven behavior that has a complex internal structure (“syntax”) and manifests itself across the whole spectrum of human populations and ages. Yet, music can only convey forms of emotional meaning; there are no whistled or hummed languages with an expressive power even remotely resembling that of spoken or sign languages. Chierchia argues that the reason for this is to be sought in the fact that the syntax of natural languages has a ‘special place’ for logic in the so called functional vocabulary of a language. To put it simply, meaning stems primarily from the human capacity for logic and the way in which the syntax of function words empowers humans with such a capacity. Chierchia plans to substantiate the thesis that the functional lexicon is the key to meaning by discussing and further investigating some major recent results in the study of quantifiers across languages.