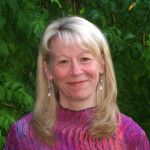 Geraldine Richmond holds the Richard M. and Patricia H. Noyes Professorship in Chemistry at the University of Oregon.  She received her Ph.D. in chemistry from the University of California, Berkeley, in 1980. Ms. Richmond is recognized for her fundamental studies of molecular processes at semiconductor, metal, and liquid surfaces using state-of-the-art laser techniques.  Ms. Richmond has received numerous national and international awards and honors for these studies, and has over 160 publications to her credit.

Ms. Richmond is also known widely for her teaching and mentoring activities. Her extensive international efforts in recruiting and mentoring women in the sciences at all levels has been recognized with many awards including the Presidential Award for Excellence in Science and Engineering Mentoring from the White House.  In 1998 Geraldine Richmond founded an organization called "COACh" to foster the career success of women scientists in academia (http://coach.uoregon.edu/).  Over 3,000 women academic scientists from around the country have since participated in its highly effective programs.