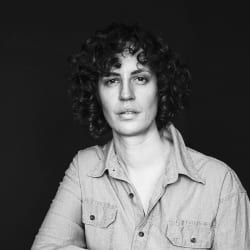 Gina Abatemarco is a Writer and Director based in Brooklyn, New York dedicated to immersive and experiential filmmaking. Gina’s films have played around the world at festivals including IDFA, Sheffield Doc Fest, Full Frame, The Royal Anthropological Institute, and The American Film Festival in Wroclaw. When not working on films Gina is active in the sustainable food movement. She has worked for farmers and artisans at The Union Square Greenmarket, collaborated with Slow Food International, and apprenticed at the “Rome Sustainable Food Project" at The American Academy in Rome. Gina’s debut feature documentary KIVALINA, capturing the intertwining plight to survive and edible traditions of an ancient Arctic culture, made its world premiere at the Berlinale Culinary Cinema. In 2016, KIVALINA was broadcast on the Emmy Award winning show America Reframed in collaboration with American Documentary.Gina's film work has been supported by The Corporation for Public Broadcasting, The Tribeca Film Institute, The IFP Film Labs, and Vision Maker Media. Gina is the Co-Founder of the Fusion Film Festival celebrating female filmmakers at NYU Tisch School of the Arts where she received a BA from The Department of Film & Television.