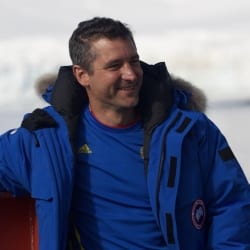 Starting as a young boy collecting snails, Gonzalo Giribet’s passion for zoology stems from his childhood growing up in a beach town south of Barcelona; even then he was more interested in sea creatures and the ocean than in anything most other kids liked. He always knew he wanted to be an invertebrate zoologist, so he studied biology for his undergraduate at the Universitat de Barcelona, where he also received his PhD in the department of Animal Biology. He then moved across the Atlantic to pursue a lifetime dream of working in one of the greatest natural history museums in the world, and began his postdoctoral research at the American Museum of Natural History in New York City. He is now the Alexander Agassiz Professor of Zoology in the Museum of Comparative Zoology (MCZ, Harvard University), Professor of Organismic and Evolutionary Biology, and Curator of Invertebrates in the MCZ. In addition, he is a Research Associate in the American Museum of Natural History and in the Field Museum of Natural History, Chicago, a Fellow of the California Academy of Sciences, San Francisco, and a Corresponding Member of the Biology Section of the Institute of Catalonian Studies, Barcelona. He has served as President in the International Society of Invertebrate Zoology and in the Willi Hennig Society, and currently serves as Editor in Chief of the journal Invertebrate Systematics, in addition to serving in the editorial boards of about a dozen journals on invertebrates and systematics. He has published more than 300 scientific articles and specialized book chapters and has edited three books, including Harvestmen: The Biology of Opiliones (Harvard University Press, 2007). He has given more than 50 invited lectures at universities and research institutions all over the world and has conducted field work collecting invertebrates in all oceans and on all continents, including a recent fieldtrip to Antarctica. Giribet has named more than a hundred new species, genera and families of invertebrates, including arthropods, mollusks and ribbon worms. Giribet’s career has centered around understanding how animal diversity originates and persists through time, his interests focusing on the origins of animal diversity around the Cambrian and spreading to the diversification of species on land and at sea through today. His areas of inquiry thus include biodiversity, ecology, systematics and biogeography, and he is best-known for his contributions to understanding the animal Tree of Life—an area where his research papers have been cited by colleagues thousands of times—and for his work understanding evolutionary and biogeographical patterns in daddy-long-legs.