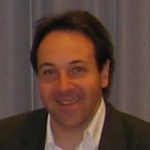 Gustavo Paratcha received his M.Sc. in Biology (1992) and his Ph.D. in Biological Sciences (1997) from the University of Buenos Aires (UBA), Argentina. During his Ph.D. studies, his research focused on striatal synaptic changes underlying circling motor
behavior.

In 1997, he became a postdoc in Jorge Medina’s laboratory at the Institute of Cellular Biology and Neuroscience (IBCN), where he investigated the role of synaptically-located transcription factors on experience-dependent plasticity.

In 1999, he joined Carlos Ibanez’s laboratory at the Neuroscience Department, Karolinska Institute, Sweden, to carry out a second postdoc studying the signaling pathways and biological effects through which GDNF (Glial cell line-Derived Neurotrophic Factor) family ligands (GFLs) and their receptors influence neuronal development. Later in 2003, he got an Assistant Researcher Position from the Swedish Medical Research Council (Vetenskapsradet) and in 2005 he became a research leader at the Department of Neuroscience, Karolinska Institute.

He returned to Argentina in 2008 to establish the Laboratory of Molecular and Cellular Neuroscience at the Institute of Cellular Biology and Neuroscience (IBCN)-UBA-CONICET. His research deals with the study of the molecular mechanisms that modulate trophic factor receptor signaling and biology in neural progenitors and mature neurons as well as its functional relevance for neurodegenerative disorders and tumor development. Another goal of his research is to identify novel receptors and key mechanisms of intercellular communication for developing neurons.

Currently, he is an Independent Investigator of the Argentine Scientific Research Council (CONICET) and an affiliated researcher to the Department of Neuroscience at Karolinska Institute. During his career, he published more than thirty peer-reviewed research articles and reviews in leading international scientific journals, some of them in top journals such as Neuron, Cell, Nature Neurosci, Proc. Natl. Acad. Sci-USA, J. Neurosci, and Trends in Neurosci. He is also a research advisor of the English Medical Research Council (MRC, London, UK), member of ad-hoc commissions of CONICET and the National Agency for Scientific Promotion and Technology (ANPCyT, Argentina) and consultant peer-reviewer of many international scientific journals.