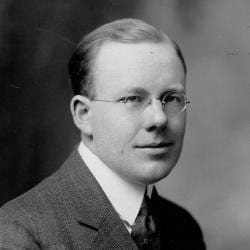 As published in the Foundation’s Annual Report for 1925–26:

Thompson, Harold William: Appointed for research in connection with the preparation of a Life of Henry Mackenzie—a Scottish man of letters of the Eighteenth Century—principally in the libraries of Scotland; tenure, twelve months from August 1, 1925.

Publications: Editor, “The Anecdotes and Egotisms of Henry Mackenzie” (in press), hitherto unpublished and throwing important light upon the social and literary life of Britain in the eighteenth century; discovered by the Editor while a Fellow of the Foundation. Co-editor, college text of Lincoln’s writings. Author, “Anthems of Today,” “Church Organ Music” (in press), articles on ecclesiastical music. Co-author, “Choirmasters’ Guide.” Librettist of two sacred cantatas, “The Prince of Peace” and “The Light of the World,” (the latter winning first prize in a competition open to all American and Canadian composers and librettists).