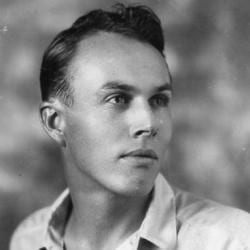 PARTCH, HARRY.  Appointed for creative work in musical composition based on a system of music, instruments and notation having 43 tones to the octave, and on harmonization and dramatization of the inflections of spoken words; tenure, twelve months from April 1, 1943.

Born June 24, 1901, Oakland, California.  Independent research and experiment in multi-tonal scales and instruments since 1923, including research at the British Museum, 1934–35.