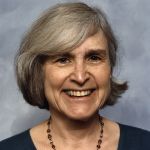 Hasia Diner is the Paul and Sylvia Steinberg Professor of American Jewish History at New York University, with a joint appointment in the departments of history and the Skirball Department of Hebrew and Judaic Studies, and is the Director of the Goldstein Goren Center for American Jewish History. She has been a Lilly Fellow at the Mary I. Bunting Institute at Radcliffe College, in 1998 won election to membership in American Academy of Jewish Research, and in 2004 to the Society of American Historians. She has also been a fellow at the Shelby Cullom Davis Center for Historical Research at Princeton University.

A specialist in immigration and ethnic history, American Jewish history, and the history of American women, she is the author of numerous published books, including In the Almost Promised Land: American Jews and Blacks, 1915-1935 (1977, reissued, 1995); Erin’s Daughters in American: Irish Immigrant Women in the Nineteenth Century (1984), and A Time for Gathering: The Second Migration, 1820-1880 (1992), the second volume in the Johns Hopkins University Press series The Jewish People in America.

Lower East Side Memories: The Jewish Place in America was published 2000 by Princeton University Press. In December 2001 Hungering for America: Italian, Irish, and Jewish Foodways in the Age of Migration was published by Harvard University Press. Basic Books released in the Spring of 2002 her history of American Jewish women, entitled Her Works Praise Her, which Professor Diner co-authored with Beryl Leif Benderly. The University of California Press released in the fall of 2004 The Jews of the United States: 1654-2000, a history of American Jewry as part of its series on the histories of modern Jewish communities.

We Remember with Reverence and Love: American Jews and the Myth of Silence After the Holocaust, 1945-1962, published by New York University Press in the spring of 2009, won the 2010 National Jewish Book Award in the category of American Jewish Studies.

In her Guggenheim year she will be working on her newest project, “Peddlers: A New World Jewish History,” which will look at the role of on-the-road peddling as a force which stimulated Jewish migration to and integration in nearly every place in the “new world,” including the British Isles, North, South, and Central America, South Africa, and the Antipodes. How, she wants to know, did this utterly prosaic and familiar occupation serve as an engine which shaped modern Jewish history and the histories of all those places.