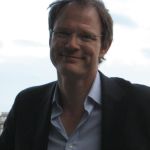 My project in 2014–2015 has to do with two topics that have intrigued and teased me for decades: translation (and what, in translating, escapes the narrow definition of translation) and the early Chinese philosophical book Zhuangzi (or Chuang-tzu). It was a happy day when I realized that these two topics had a deep mutual relation. Again and again in Chinese history, the bizarre anecdotes and surreal parables of the Zhuangzi have served as models for the assimilation into Chinese culture of originally foreign texts and ideas. I will be writing up several episodes of this 2,000-year history, and inferring lines of connection among them, for a book tentatively called Zhuangzi Inside Out: Translation as Citation. And as for how I got to this point: Born in Nashville, Tennessee, I took my B.A. at Duke University in classics and comparative literature, then wandered to Paris for two years as a student in the École Pratique des Hautes Études and the Institut National des Langues Orientales, working there part-time for a performing-arts organization. I received my Ph.D from Yale University in 1990 with a dissertation on the ancient Chinese Book of Songs and its commentary tradition, advised by Kang-i Sun Chang and Geoffrey Hartman, and then embarked on a career of teaching at UCLA, Stanford, Yale, and Chicago, with visiting posts at the City University of Hong Kong, Paris-III, Aarhus, and Tsinghua. Through most of that time, I have been concurrently a member of a comparative literature department and an East Asian language and literature department. My books nag at questions of conceptual and linguistic mediation between cultural blocs, usually dealing with premodern periods when the practical obstacles to large-scale interchange of populations and ideas were steep. I see in the efforts of people to work around these obstacles a broad set of models for intercultural dialogue that we tend to disregard today, so persuasive has the idea of assimilation into a single world culture, vehicled by a single communications network, become to us. It has been my good fortune to work closely with people outside my immediate profession and to learn from them: the dance and performance impresario Bénédicte Pesle, the artist Mel Chin, the global health advocate Paul Farmer, the editor Helen Tartar—and of course my wife, the cinema and literature scholar Olga Solovieva, and our three small boys. I would like to think that the results of my expeditions into terrains remote from these people’s areas of concern will interest them as well. That would be the real reward of interdisciplinarity. I look forward to the gift of unencumbered time that the Guggenheim Foundation’s generosity has made possible. Profile photograph by Olga Solovieva