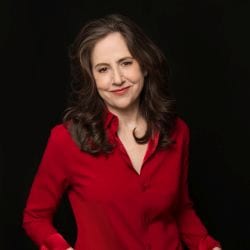 A life-long New Yorker, she attended Hunter College Elementary School and High School before graduating from the Bronx High School of Science. She received her B.A. with Distinction in all subjects from Cornell University and her MFA from Columbia. She has from time to time, left the state, but has never truly lived anywhere else.

While attending grad school at Columbia she worked as a neurological researcher at Bellevue Hospital to pay the rent, which sowed the seeds for her 1998 novel The Revisionist. She sold her masters thesis, a collection of stories called Not A Free Show, to Knopf, in 1988. Since then she has published six novels. The latest, Come With Me, was published last year. The San Francisco Chronicle called it “mindblowingly brilliant”, a phrase she will have tattooed across her chest with her Guggenheim grant money. The New York Times described the novel as “strikingly original, compelling and beautifully written.” The book before that, This Beautiful Life (2011) was an international and New York Times bestseller and was a New York Times Notable, as was her 2001 novel P.S.. A Day at the Beach (2007), her 9/11 novel, is her favorite of all her books.

P.S. was also made into a film, starring Laura Linney, Topher Grace, and Paul Rudd. Ms. Schulman shares a screenplay credit on the film with its director. P.S. is Ms. Schulman’s only produced movie credit, although she has written or rewritten or co-written eight other projects, working for Francis Coppola/Zoetrope, HBO, Killer/Glass Elevator and Good Machine (among others).

Schulman’s recent work takes a hard look at cultural upheavals (i.e. Holocaust revisionism, 9/11, the Internet and nuclear power) through the lens of an individual or family or couple.

Schulman’s fiction and non-fiction have appeared in such places as Vanity Fair, Time, Vogue, GQ, the New York Times Book Review, A Public Space and The Paris Review. She also co-edited an anthology of essays about parenthood with Jill Bialosky, called Wanting A Child. Her work has been widely anthologized and translated into many languages. She has been an Aspen Words Fellow (The Aspen Institute), a Sundance Fellow, a New York Foundation for the Arts Fellow and has won a Pushcart Prize. She collaborated with the choreographer Hilary Easton, writing text for Ms. Easton’s dance The Short Cut. She has taught in many conferences and universities, including Columbia, NYU, Emory, Bard College, Bread Loaf and the Tin House Writers Conference. She is presently the Fiction Chair at the MFA Program at The New School, where she is a tenured Professor of Writing. Along with her wonderful students, she created and is the Executive Director of WriteOnNYC, a passion project pairing MFA students with underserved New York City school children, who joyfully write their hearts out.