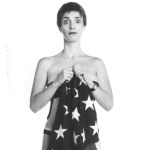 Holly Hughes began her performance career in New York’s East Village WOW Café, which described itself as a “home for wayward girls,” in 1981, after receiving a B.A. from Kalamazoo College.

Her early work, such as The Well Of Horniness, Dress Suits to Hire, and The Lady Dick, married a camp aesthetic to an anarchic feminist critique. Later work focused on mining autobiographical material to explore sexual and gender identity. Five of her plays are collected in Clit Notes: A Sapphic Sampler, published by Grove Press. She is also the co-editor of O Solo Homo: The New Queer Performance, winner of the Lambda Book award in Drama, and the forthcoming Memories of the Revolution for University of Michigan Press. The recipient of funding from the National Endowment for the Arts, the Map Fund, and the New York State Council, among others, Hughes’s work has been presented at a wide variety of venues including alternative spaces such as Hallwalls, Highways, P.S. 122, and legitimate theatres including Yale Rep, Seven Stages, the Victory Gardens, Manhattan Theatre Club, New York Theatre Workshop, and many others.

Current projects include an interactive performance piece, Let Them Eat Cake, which reframes the debate around gay marriage by staging an actual wedding. Created in collaboration with Megan Carney and Maureen Angelos, Cake will premiere at Dixon Place Theatre in New York City on December 2, 2010. She is also touring a new solo piece directed by Dan Hurlin, The Dog and Pony Show (Bring Your Own Pony).

Hughes is an Associate Professor in the School of Art and Design at the University of Michigan, with joint appointments in Theatre and Drama and Women’s Studies. She co-directs the B.F.A. in Interarts Performance with Malcolm Tulip.