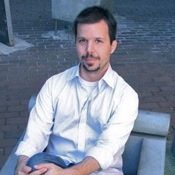 Huck Hodge writes music that explores the embodied poetics of organized sound, perceptual illusion and the threshold between design and intuition. His output is varied and comprises a wide range of symphonic, chamber, and multimedia works. Hodge is the winner of the Rome Prize, the Gaudeamus Prize, The Goddard Lieberson Fellowship from the American Academy of Arts and Letters, the Aaron Copland Fellowship from the Bogliasco Foundation, and commissions from Music at the Anthology, the American Composers Forum, the American Academy in Rome, and Musik der Jahrhunderte and Muziek Centrum Nederland, among many other awards and commissions.

Praised by the New York Times for his “harmonically fresh work . . . full of both sparkle and thunder," his music has been the subject of numerous international radio broadcasts and is regularly performed at major new music festivals throughout the world (ISCM, Nuova Consonanza, Gaudeamus Muziekweek, MaerzMusik, Laboratoire Instrumental Europeén, etc.). His notable collaborations include those with members of Ensemble Modern and the Berlin Philharmonic, the ASKO Ensemble, the Berlin Philharmonic’s Scharoun Ensemble, l’Ensemble Aleph, the JACK Quartet, and the Talea Ensemble. His music is licensed and distributed by Alexander Street Press.

Hodge received his M.A. and D.M.A. from Columbia University, where he studied Composition with Tristan Murail and Fred Lerdahl. Prior to this, he studied Music Theory and Computer Music at the Musikhochschule Stuttgart, where his teachers included Georg Wötzer and Marco Stroppa. During this time, his studies were supported with funding from the Andrew W. Mellon Foundation and the Deutscher Akademischer Austauschdienst (DAAD). He is currently Assistant Professor in Composition at the University of Washington.