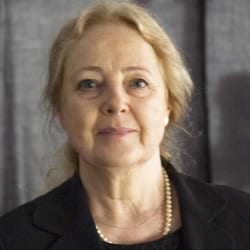 Irena Grudzińska Gross emigrated from her native Poland after student unrest of 1968. She studied in Poland, Italy and in the United States; she received her PhD from Columbia University in 1982.She taught East-Central European history and literature at Emory, New York, Boston and Princeton universities. Her books include Golden Harvest with Jan T. Gross, Oxford University Press, 2012, Czesław Miłosz and Joseph Brodsky: Fellowship of Poets, Yale University Press, 2009, and The Scar of Revolution: Tocqueville, Custine and the Romantic Imagination, University of California Press, 1995. She edited books on literature and the transformation process in Central and Eastern Europe and published numerous book chapters and articles on these subjects in the international press and periodicals. Between 1998-2003, she was responsible for the East-Central European Program at the Ford Foundation.

As a Guggenheim Fellow she will be working on a biography of Alexander Weissberg-Cybulski (1901-1964), an Austrian-Jewish physicist, political prisoner, writer, businessman, communist, then anti-communist and gambler. His life will be an entry point into the most important phenomena in twentieth-century East-Central European Jewish history: social mobility limited by violence and discrimination, assimilation through education and politics, internationalism versus national affiliation, family discontinuities, and geographic displacement. Weissberg’s life, the story of his milieu and that story’s aftereffects on her own post-World War II generation will constitute three aspects of that book.