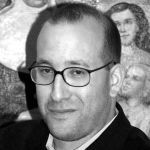 Jacob Soll received a BA from the University of Iowa, a Diplôme d’Études Approfondies from the École des Hautes Études en Sciences Sociales in Paris in 1995, and a Ph.D. from Magdalene College, Cambridge, UK.  He has taught at Princeton, and Rutgers University, Camden, where he is an associate professor. He has been a Luso-American Fellow at the National Library in Portugal and a Fernand Braudel Senior Fellow at the European University Institute in Florence, Italy. He has received the Forkosch Prize from the Journal of the History of Ideas; an NEH Fellowship; and the Jacques Barzun Prize from the American Philosophical Society. His work has appeared in French, German, Italian, and Japanese. To understand the history of political knowledge, liberty, and power, Mr. Soll has built an interdisciplinary approach, bringing together political, intellectual, and economic and social history, the history of books, libraries, education and information.

His first book, Publishing The Prince: History, Reading, and the Birth of Political Criticism (Michigan, 2005), received the 2005 Jacques Barzun Prize. His second book, The Information Master: Jean-Baptiste Colbert’s Secret State Intelligence System (forthcoming from Michigan, May 2009), tells the story of how Louis XIV’s minister Colbert perceived that the gathering of information on a massive scale would enable him to create an essential instrument of political power and control. Colbert sought to master the pan-European public sphere of learning and the Republic of Letters, linking it to a vast administrative archive by creating a competing secret state information system. In the end, however, the secrecy of this information bank led to its demise, weakening the very state system Colbert had worked to build.

His current book project for the Guggenheim Fellowship is The Enlightenment Library and The Quest for Universal Knowledge. It examines the connection between traditional institutions—royal, monastic, and university libraries—and new subversive libraries, bookshops, lending rooms, and societies and personal collections in the late seventeenth and early eighteenth centuries in Europe and the Americas. The book focuses on the exchanges between so-called high and low cultures, and how Enlightened Despotism and the Church interacted with radical and subversive cultures, and vice versa. An expansion of his past work on the relationship between political repression and intellectual innovation, this book examines the role of information impresarios, or collectors of mass amounts of data, and their complex relationships with the new philosophies, institutions, and cultural phenomena of the Enlightenment. The scope is pan-European, including examples from German states, Italy, Iberia, France, Britain, Mexico, and the American colonies.

Connected to his libraries and information studies, Jacob Soll has also begun writing another project, The Reckoning: Accounting and the Problem of Modern World, which seeks to show the central role played by financial accounting not only in the birth of capitalism, empires, and the modern state, but also in the development of individualism and paternalism. From the late Middle Ages to the nineteenth century, from Asia to the Middle East and Europe, accounting has been present in households, businesses, navies, and governments. While its rules are fairly straightforward, they are not always followed, or even willfully ignored. Indeed, sometimes the very accountants trusted to do accounting do not do it. Where did modern accounting come from and what is it about accounting that made it so hard to adopt as a standardized practice over a period of four hundred years?