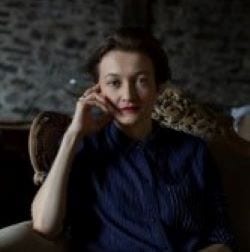 Jana Prikryl was born in Ostrava, Czechoslovakia; her family fled the country when she was five years old, settling in Canada when she was six. Her two books of poems—No Matter (Tim Duggan Books, 2019) and The After Party (Tim Duggan Books, 2016)—were both among The New York Times' Best Poetry Books of the Year. Her poems have appeared in magazines including The New Yorker, the London Review of Books, Harper's, and Granta, and are anthologized in The Best American Poetry 2020 and The Unprofessionals: New American Writing from The Paris Review (2015). Her recent essays on film and photography can be found in The New York Review of Books and The Nation. No Matter was written thanks to a 2017–2018 fellowship at the Radcliffe Institute for Advanced Study at Harvard University. Her work has also received support from Yaddo and the Canada Council for the Arts. She is a senior editor and the poetry editor at The New York Review of Books. Links to some of her poems and essays can be found at her website. Photo Credit: Willy Somma