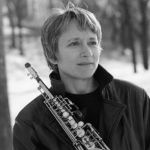 Soprano saxophonist/composer Jane Ira Bloom has been steadfastly developing her unique voice on the soprano saxophone for over 30 years. She is a pioneer in the use of live electronics and movement in jazz, as well as the possessor of "one of the most gorgeous tones and hauntingly lyrical ballad conceptions of any soprano saxophonist – Pulse."

She was recently awarded a 2007 Guggenheim Fellowship in music composition. Winner of the 2007 Mary Lou Williams Women In Jazz Award for lifetime service to jazz, the 2001, 2003, & 2006 Jazz Journalists Award for soprano sax of the year, the Downbeat International Critics Poll for soprano saxophone, the Charlie Parker Fellowship for Jazz Innovation and the International Women in Jazz Jazz Masters Award, she is the first musician ever commissioned by the NASA Art Program, and was also honored by having an asteroid named in her honor by the International Astronomical Union (asteroid 6083janeirabloom).

A strong visual thinker and a cinematic stylist, Bloom’s affinity for other art forms such as painting, film, theatre and dance has both enriched her music and brought her into contact with other innovative artists such as actors Vanessa Redgrave & Joanne Woodward, painter Dan Namingha, and legendary dancer/ choreographer Carmen DeLavallade. She has composed for the American Composers Orchestra (NYC), the St. Luke’s Chamber Ensemble, the Pilobolus, Paradigm, & Philadanco Dance Companies, TV movie features (Shadow of A Doubt/ NBC-TV), and film soundscores (John Sayles’ Silver City) writing works for large ensemble involving her signature movement techniques. She has also collaborated with classical composers premiering new works for soprano saxophone ("Sinfonia" by Augusta Read Thomas). Bloom is the recipient of numerous grants including two artist fellowships in jazz composition from the Chamber Music America / Doris Duke New Jazz Works Program for the creation of Chasing Paint, a series of compositions inspired by painter Jackson Pollock that premiered at the Museum of Fine Arts in Houston and a suite of new compositions for her current quartet.

"Sometimes I throw sound around the band like paint and other times I play and feel as if I was carving silence like a sculptor."

She has recorded and produced albums of her music dating from 1977 to the present. In 1976 she founded her own record label & publishing company (Outline Music) and later recorded for ENJA, CBS, and Arabesque Records. Her CD Like Silver, Like Song featuring keyboardist Jamie Saft, bassist Mark Dresser, and drummer Bobby Previte appears on the innovative Artistshare label.

Bloom has been the subject of a number of media profiles; she has been featured on CBS TV’s Sunday Morning, Talkin’ Jazz on NBC-TV, TIME Magazine’s Women: The Road Ahead special issue, in the publication Jazzwomen: Conversations w/ 21 Musicians, in the Library of Congress Women Who Dare calendar, in Life Magazine’s "Living Jazz Legends," on NPR’s Morning Edition, Jazzset, Live From the Kennedy Center w/ Dr. Billy Taylor, and in the documentary film Reed Royalty hosted by Branford Marsalis. She is on the faculty of the New School for Jazz & Contemporary Music in NYC, holds degrees from Yale University and Yale School of Music and studied saxophone with woodwind virtuoso Joseph Viola. Nat Hentoff has called Bloom an artist "beyond category." Bill Milkowski has called her "A true jazz original…a restlessly creative spirit, and a modern day role model for any aspiring musician who dares to follow his or her own vision."