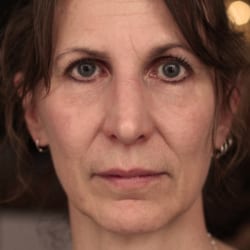 Janet Biggs is known primarily for her work in video, photography and performance. Her work focuses on individuals in extreme landscapes or situations, and often navigates the territory between art and science. She has captured such events as sulfur miners inside an active volcano and kayakers performing a synchronized ballet in Arctic waters. Her recent projects have explored the creation and loss of memory from personal, physical, and scientific perspectives. Biggs’ work has taken her from areas of conflict in the Horn of Africa to Mars (as a crew member of one of Mars Desert Research Station’s simulation missions). She has collaborated with neuroscientists, Arctic explorers, aerospace engineers, astrophysicists, Yemeni refugees, a gospel choir, and a robot.

In addition to videos, her work includes multi-discipline performances, often in untraditional settings and including multiple large-scale videos, live musicians, and athletes.

Biggs lives and works in Brooklyn, New York. As a Guggenheim Fellow, Biggs will continue working with and filming refugees in the Horn of Africa and will return to Mars. She plans to explore the far ends of the spectrum of human movement and ambition in pursuit of hope and new possibilities.