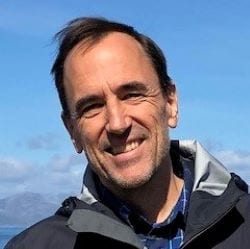 Jeff Goodell's most recent book, The Water Will Come: Rising Seas, Sinking Cities, and the Remaking of the Civilized World (Little, Brown, 2017), was a New York Times Critics Top Book of 2017.  He is the author of five previous books, including How to Cool the Planet: Geoengineering and the Audacious Quest to Fix Earth's Climate (Houghton Mifflin Harcourt, 2010) and Big Coal: The Dirty Secret Behind America's Energy Future (Houghton Mifflin Harcourt, 2006). Jeff grew up in Silicon Valley, where he briefly worked at Apple before quitting to deal blackjack in Nevada. He got his start in journalism covering crime and politics in New York City.  He is a long-time Contributing Editor at Rolling Stone, where he has been writing about climate change for more than a decade (you can find an archive of his recent articles, as well as dispatches from a recent trip to Antarctica, on his website).  As a commentator on energy and climate issues, he has appeared on many radio and TV programs, including The Oprah Winfrey Show. Photo Credit: Carolyn Beeler