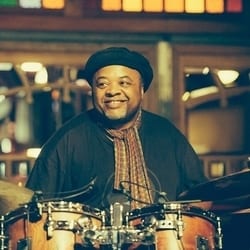 Jeff “Tain” Watts (Jeffrey Lynn Watts) was born and raised in Pittsburgh. His early years were spent in the town’s Hill District neighborhood, kind of the “Sugar Hill” of Pittsburgh, during the height of the American Civil Rights movement. He began playing snare drum in 4th grade, and quickly became involved in school band, orchestra and choir. At the same time, he got to see funk greats like James Brown, the Temptations and the Jackson 5 in concert during their prime.

For the 6th grade, his family moved to Crestas Terrace, away from downtown, and his investigation of playing continued, with participation in marching and concert band, orchestra, stage band, drum corps, etc., while at home his tastes broadened to Hendrix, Stevie Wonder, P-Funk, Zappa and 70’s fusion music. He credits early teachers Richard Smith, D. Michael Kumer and John A. Thomson, Jr. with instilling standards of preparation and performance of music that still resonate with him today.

Watts attended Duquesne University for two years as an applied conservatory student, specializing in timpani, and eventually performing semi-professionally in the classical idiom. The chance to interpret Beethoven, Stravinsky, Milhaud and David Stock, amongst others, would leave a lasting impression, and Watts cites teachers William Schneiderman and Bernard Goldberg as important during this time. Concurrently, Jeff was exposed to the musics of Charlie Parker, John Coltrane and others from the jazz canon by his cohort David Budway, and began to connect the dots with American music.

Mr. Watts transferred to Berklee College of Music in 1979, meeting and interfacing with future allies and contemporaries as Branford Marsalis, Kevin Eubanks, Donald Harrison and many more. The palette of study became wide open, as he was more focused on the drum set, and there was a desire to be a well-rounded performer. In contrast to his classical studies, Watts is pretty much self taught on the drum kit, while citing helpful advice from Roger Humphries, Sr., Alan Dawson, Art Blakey, and Billy Higgins.

Branford Marsalis recruited Watts for his brother Wynton’s first group, which would bring him to New York, and stimulate his career. Jeff would go on to garner three Grammy Awards with Wynton, followed by another two with Branford years later. He was also able to apprentice with many legends of the music, citing Ron Carter, McCoy Tyner, George Benson, Gil Evans, Lew Soloff and many more as being helpful and influential. A detailed list of awards and accolades may be found here.

A late bloomer as a composer, Watts trusts his ears and instincts, trying to exploit the freedom granted by developments in all music. The line between contemporary classical, jazz, folkloric and other forms including hip hop is a light one, as Jeff feels free to mix and match his influences. He strives for expression foremost, and tries to not limit where a composition can go. He also attempts to humanize polyrhythm, using it to replace the need for a conductor, or to emulate organic situations and emotion. He wishes to thank Kenny Kirkland, Robert Hurst, Geri Allen and John Hicks, amongst others, for encouraging and inspiring him to write.

Mr. Watts would like to thank his family, for always encouraging him, and also the community of musicians and artists for their kindness.